The Short- Damien Chazelle’s directorial debut is a heartbreakingly honest and scathing look into the competitive world of Music at a Julliard-esque school. J.K. Simmons gives his most fully realized performance as one the years more ultimate villains but the beauty of Chazelle’s work is you are more likely to question whether he is a bad guy or just a teacher trying to realize his students full potential.

Whiplash is the one the year’s most surprising films but it surprises for all the right reasons, A 29 year old director who got the attention of Director Jason Reitman (Juno, Up in The Air) and Producer Jason Blum (The Normal Heart, Insidious) after his short version of this film won a Special Jury Prize at Sundance in 2013. It was that prize that got Chazelle a young up and coming director with no feature credits to his name the money to make a feature film with two very talented actors leading the cast. It’s those talented actors along with the vision of the young Chazelle that carry Whiplash into Oscar Buzz. Miles Teller (The Spectacular Now) plays Andrew, a student at Schafer (this films version of Julliard) an aspiring drummer in his first year. Andrew’s First run-in with the mysterious Orchestra leader Fletcher doesn’t go as planned but when the fearsome teacher hears Andrew play during a Orchestra he enlists him to join his Concert Orchestra. Chazelle doesn’t let the audience know why Andrew wants into this particular Orchestra so badly until he finally gets in then all is explained, Fletcher has Andrew show up 3 hours prior to when the Orchestra meets and just sit there, he sits and waits for hours until Orchestra comes into session. Fletcher is at first welcoming, telling Andrew stories and testing Andrew then Andrew’s first opportunity ends with Fletcher throwing a chair at his head, this is the first of many moments Fletcher instills fear into Andrew.

J.K. Simmons, a character actor who is most known for playing second fiddle whether it’s as J. Jonah Jameson in Sam Raimi’s Spiderman films or as the fun loving father in Juno. Simmons holds more than his fair share of credits and even his shorts appearance in Jason Reitman’s Up in the Air came close to what could have been awards caliber performances. Simmons portrays an explosively cruel villain who hurls curses and insults with such veracity and disdain for his students that you will see in a film about a relationship between teacher and student. Andrew is shy, quiet but has his dreams, he wants to be the greatest drummer of all time and while he may lack the talent in Fletcher’s eyes he is a talented man. Teller has already showed he has the ability to play overconfident but compelling characters and Andrew is a definite change for the young actor, he is scared shitless, somewhat shy, but also very driven. That drive comes out more as the film continues and his confidence as drummer grows. Only when he begins a relationship with the girl (Glee’s Melissa Benoist) who works at the movie he frequents with his father (Paul Reiser)   As the film progresses you begin to see a darker side of Andrew, a guy who lacks the luck and instincts of the characters he has played in the past. Instead Andrew is one of the unluckiest leading characters you will see in a film this year, that comes mostly from his chosen profession and the choices he makes to put himself in the same room over student’s all competing for the same thing and his bastard of a teacher. Teller gives his most honest performance, forcing audiences to sit in terror as he continually earns the ire of his teacher. Teller shines bright as Andrew, but Whiplash’s most memorable performance comes from Simmons who is as far as I am concerned a lock for Oscar gold. His biggest competition coming from Edward Norton in Birdman and Ethan Hawke for Boyhood both have earned acclaim but in my opinion Simmons as Fletcher is the role of his career and the best turn by a supporting actor this year. It is also the AH HA moment we have all been waiting for, we finally realize what this guy can do if given a juicy enough role and Fletcher is a very juicy role for the actor. Simmons is utterly mesmerizing and totally terrifying, a fully realized portrayal of a guy who is causing young college kids and real talented young musicians to fall into mental breakdowns, He can break your spirit and your dreams with 2 scathing sentences and then move on to the next guy like nothing changed.  He is one of the best movie bad guys you will see on film this year and you will find yourself wondering what your next action would be if you were in Andrew’s position. 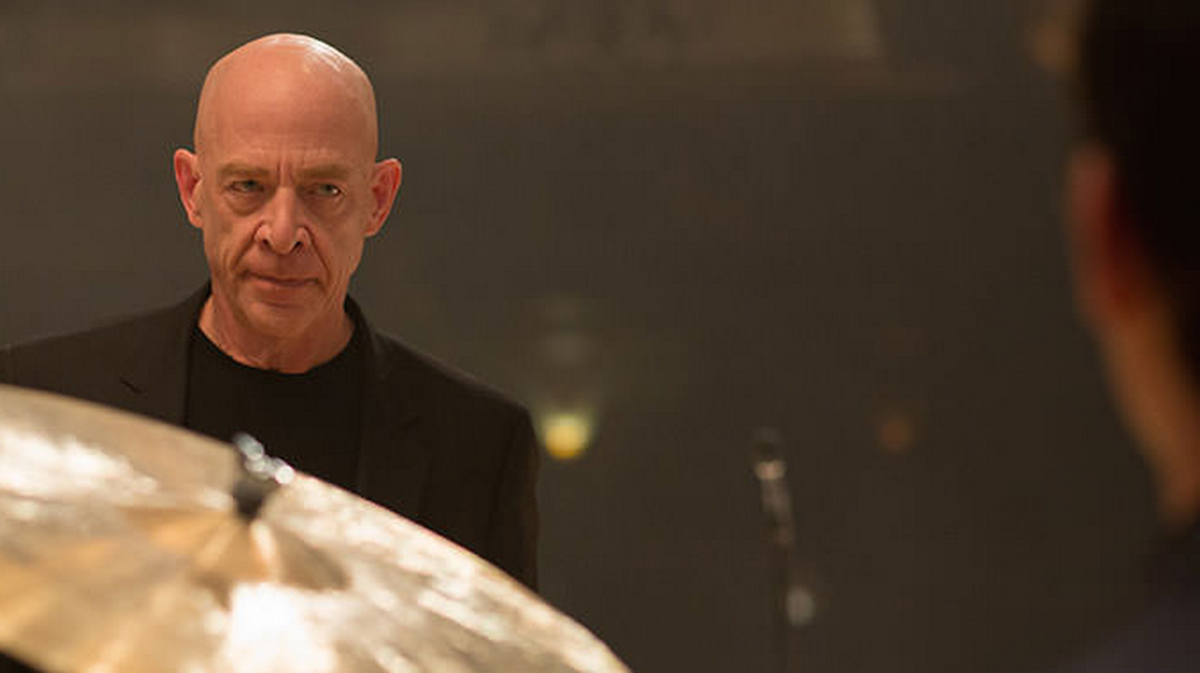 Damien Chazelle is an absolute talent and like other great indie helmers we have discovered over the past few years he is destined for a much bigger career. His script is a witty and scathing look at competitive music schools and his direction matches the darkness of his film. You will at one moment be tapping your toe to a beautiful jazz exposition and the next staring at the screen in horror as Fletcher tears into Andrew with utter brutality. You feel for Andrew and its Teller’s passion and talent as an actor that matches Simmons ferocity. Both are wonderful and it’s those two performances and the wonderful storytelling by Damien Chazelle that make Whiplash one of the ten best films of 2014.