Just Before I Go

The Short-The freshman effort by Courteney Cox may lack strength from its script with lackluster dialogue but is helped by a hilarious cast of characters and a strong performance from Seann William Scott in a role that takes the actor out of his comfort zone. Cox’s strong direction and cast make Just Before I Go an above average comedy with more going for it then against it.

When I try to decide what movies to see at Tribeca Film Festival I like to find a movie that has something that makes it one of a kind, Last year Clark Gregg’s Trust Me was the film I chose to review, and one that I really enjoyed.  This year I chose Just Before I Go for a number of reasons, for one it’s the directorial debut of Courteney Cox and two it has an actor in Seann William Scott abandoning his comfort zone. In Just Before I Go the American Pie star plays Ted Morgan, following his marriage falling apart and his wife (Elisha Cuthbert) leaving him Ted sets off for his Massachusetts home ready to settle old scores before he takes his own life.

Just Before I Go is a brave film in the sense it revolves around someone who is ready to die, the only reason he has yet to take his own life is because Ted wants to beat up his high school bully (Rob Riggle), scold his horribly mean former teacher, and once and for all share his love with his high school crush (Mackenzie Marsh). During an expletive laden rant at the nursing home of his former teacher Ted meets Greta, the granddaughter of the women Ted is yelling at. Greta invites herself on Ted’s journey and forces him to let her tape Ted’s final moments. Just Before I Go is filled with strange characters, whether it’s Teds awful brother Lucky(Garrett Dillahunt), Lucky’s somewhat frisky wife (Kate Walsh), their Gay son Zeke (Kyle Gallner) and don’t forget Lucky and Teds strange hippie mother (Diane Ladd) and her Elvis impersonating partner.

The actors are fantastic and make up for some unseemly moments of dialogue. The main stars of the film are Thirlby as the pretty but layered Greta, Dillahunt who steals nearly every scene as the outlandish and hysterically funny brother and Seann William Scott who is a welcome lead actor in a movie that takes him away from American Pie and shows he can actually handle a character who does more than curse loudly and joke around. The supporting cast also managed to catch my eye with Rob Riggle also leaving his simple supporting roles behind as he plays Teds former bully who now raises a young boy with Down syndrome and makes amends for his treatment of Ted. Riggle is one of the many great members of the cast, with Kate Walsh (Grey’s Anatomy, The Perks of Being a Wallflower) also surprisingly funny as Lucky’s annoyed wife, she takes his crap but finds a way to get revenge on him at the same time in one of the funnier and stranger gags in the film. 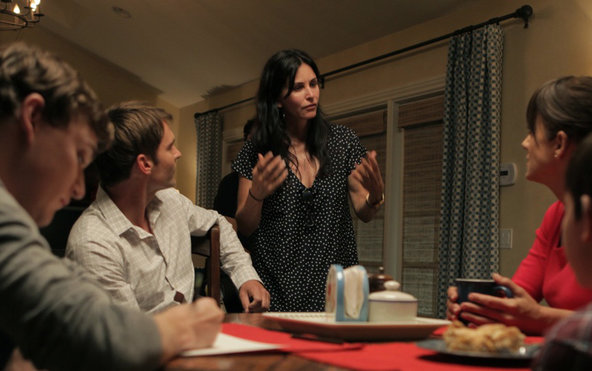 Cox’s direction is strong as well; she surprisingly manages all of these actors and also keeps the movie from being too much of a ridiculous comedy or too much of a movie about a guy ready to kill himself. She finds a middle ground and the scenes are well executed. Of course her direction is not perfect and neither is the script written by David Flebotte (Dirt, Boardwalk Empire) who wrote for Cox on her ABC drama Dirt before its cancellation. Flebotte’s story is interesting but the films dialogue ranges from funny and well scripted to eye brow raising. The Greta character especially, Olivia Thirlby nails the role but at times the words don’t match her intelligent performance. Flebotte and Cox have the characters talk at times when a subtle pause or good editing would have seemed more natural. It’s heavy handed and inconsistent which takes points away from an otherwise good film.

I hope to see Courteney Cox continue to get more opportunities to take on feature films, Just Before I Go is a definite step in the right direction for the actress who said during the Q&A following the film she does not intend to pick between acting or directing. She will do both and I can only hope her next efforts are better but luckily her first film isn’t all that bad.

Just Before I Go