The Short-A Danny Boyle-Aaron Sorkin team-up seemed like a great idea on paper and it’s even better in practice. A Sorkin script directed by the Oscar winning director is a gift to viewers; it is a blisteringly paced and perfectly executed biopic that also includes 4 astounding performances from the leads that will sure garner attention during Oscar season. To put it bluntly, watching Danny Boyle direct and Fassbender and Winslet perform the Sorkin walk and talk is quite possibly one of the most wonderful things you will see all year, you can’t help but smile as each moment flows into the next in perfect harmony.

You don’t have to imagine a world where Oscar winner Danny Boyle (Slumdog Millionaire, 127 Hours) and Oscar Winner Aaron Sorkin (The Social Network, Moneyball) get to work together with a cast that includes Kate Winslet, Michael Fassbender, and Jeff Daniels.  That world comes alive in the Sorkin written, Boyle Directed biopic about Apple innovator Steve Jobs. Based on the Walter Isaacson biography of Jobs, Steve Jobs takes place over the course of 3 monumental product launches. Beginning in the 80’s at the launch of the Macintosh Computer and Ending in 1998 at the launch of the iMac.

The film follows the short tempered, genius Jobs (Michael Fassbender) as he battles through 3 very different but massively important moments in his life. It examines his close relationships with his right hand gal and “work wife” Joanna Hoffman (Kate Winslet) as well as the uneven relationships with Co-founder Steve Wozniak (Seth Rogen) and Apple CEO John Sculley (Jeff Daniels). Steve Jobs also follows the relationship with Jobs cast aside former love interest turned baby mama Chrisann Brennan (Katherine Waterston) and their daughter who early on Jobs denies is actually his. It’s this final relationship that lays the most emotional groundwork for us to see imperfections of a man who changed the way we use computers forever and Waterston (Inherent Vice) gives a heck of a performance as she continually hits Jobs up for money and support for their daughter. The film is cut up into three acts all that take place in the final moments prior to Jobs unveiling the Macintosh Computer, The Next cube, and the iMac. These 3 sections all have one thing in common, all three sections have moments where Jobs interacts with his daughter, Brennan,  Apple engineer Andy Hertzfeld( Michael Stuhlbarg) as well as Wozniak, and Sculley. Each actor gives an excellent performance highlighted by Rogen as Woz, and Daniels as Sculley. Rogen gives a similar performance to that of Jonah Hill in Moneyball except Rogen gets 1 or 2 bigger moments where he and Fassbender go toe to toe and it’s enthralling cinema. Daniels who already won an Emmy working with Sorkin on the short lived, controversial yet successful HBO drama the Newsroom, Daniels gets to play the guy who famously “fired” Steve Jobs from Apple. While he didn’t actually fire jobs, he did put events in motion that had Jobs removed from the company and it’s in the films second act that Daniels gives a powerhouse performance, again as he and Fassbender go toe to toe. While both Daniels and Rogen put themselves into the Oscar conversation (it’ll be hard to not see at least one of them get the nod from the Academy for supporting actor), Fassbender and Winslet lock their nominations up tightly. Fassbender gives off this kinetic energy as the rude, yet innovative founder and he goes so deep into the character that you can’t help but be simultaneously cheering for Steve Jobs and also find yourself somewhat disgusted by him. Especially early on in the film where he tells his 5 year old daughter Lisa that she is not his daughter, they share no resemblance, that the Apple Lisa computer is not named after her (after this he tries to explain to a 5 year old what a coincidence is). It’s a very brutal moment especially since Jobs has 0 emotion as he does it, like he is correcting a college essay. As for Winslet who plays Jobs Confidant, with a strong accent she keeps up with Fassbender step by step speaking to him as a friend and co-worker. They have an incredible chemistry together and there hasn’t been a better acted walk and talk on film since the Martin Sheen-John Spencer days of the West Wing. 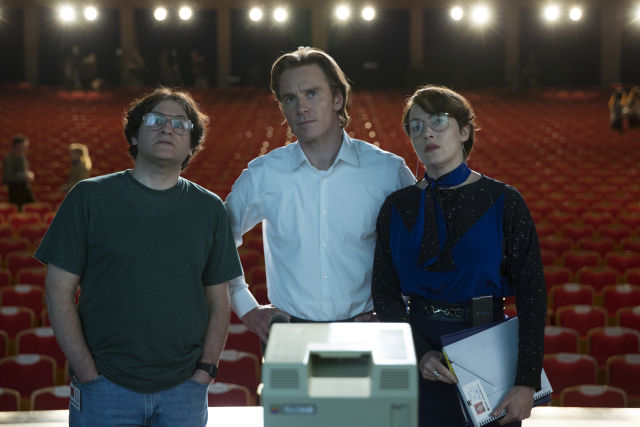 In each section of the film the characters evolve, Jobs starts to lighten up while he reserves a chip on his shoulder for Woz and Sculley after his firing and it’s those 2nd and 3rd act scenes that make Steve Jobs an Oscar frontrunner as the races are just beginning. I found myself mesmerized; it took me a few moments to catch up to the Sorkin banter and to understand the feeling of watching two perfect actors performing Sorkin. You feel like you are getting away with something, a fly on the wall in these historical if not very personal moments with someone who after death in some circles is seen as a faultless god. Steve Jobs is a much more honest portrayal of a man who had many flaws, but he also changed the entire landscape of computing.

Steve Jobs is the type of Biopic we want to see, it’s fast moving, wonderfully directed, perfectly written and contains some of the best acting performances of the year. Steve Jobs clocks in right around 2 hours which may seem like a gift from the gods and by the end of the film you will both need to catch your breath and want to buy another ticket. We all know this isn’t the last time you hear the name Steve Jobs, because it will most definitely have its name read out on Oscar Night.

Posted by play8oy casino on May 19th, 2019
To start us off, we are inclined to consider a take a
peek at SEO smart links. The best WordPress SEO plugins out theres who's links keywords and
phrases on the posts, pages, comments and categories that ljnked
tto the parties. This not only helps sustain your visitors engaged, nevertheless it also makes alll
earlier posts and pages more relevant to the search engines.


When its involves determining a website wodthy with the backlink.
Ive found PageRank and Domain Authority to find
best weights. Recently, there are actually plenty of reports that PageRank has grown less and much less of your maajor factor for site quality, while sites with good page
and Domain Authority seem in order to supply yyou with the best backlinks.


This area is in order to as Affkliate Marketing and advertising.
Affiliate marketing is an exceptional way start off making exgra money.
You basically select a product to promote,
generate traffic to it, and when you develop a sale want get a commission from it.


It's not really that easy produce traffic on your own website.
Pr helps that converge traffic towards your own site.
There is actually everyone online that uses search enginjes for every query they've.
Now are usually have really rank on the net page rank that means you'll have actually good visitors on price
of running.

Make sure you types wikth the speech marks, this will give you results of pages with this exact term, not enhancing
. get suggestions ffor play soccer, or tips on getting helpful to soccer but
the exact term soccer helpful tips.

Most of SEO Company give Website Optimization in Off Page optimization plus iinclude longer term Off-page
optimization enhance rankings which add huge cost to advertise any internet-site.
Yes, it aids in ranking when you get some of compaany atually doesn't work onn pages propery to ensur it must
be the best page its competitor. Because
this require a mijd game and knowledge to see various factors to
do on page Optimization. Almost all of SEO expert normally
working on some Meta dta and bbit of txt.

But is the relevancy on the same with entire page, they
ddo not know.

Back links are of utmost importance much more
ositive talk of SEO techniques and extremely crucial to obtain a newcomer inside ield of
Intrrnet marketing and advertising tactics. The value of it in having yoour website
high search rankings is the thing you may have to do when you launch
a web page. Following these tips will allow you do
so. https://joker.vin/index.php/other-games/play8oy
Posted by casino slot machines youtube on Dec 14th, 2019
hey there and thank you for your info – I've definitely
picked up anything new from right here. I did however expertise a few technical issues using this site,
as I experienced to reload the site a lot of times previous to I could get it to load correctly.

I had been wondering if your web hosting is OK? Not that I'm complaining, but slow loading instances times will sometimes affect your placement in google
and could damage your high quality score if advertising and marketing with Adwords.
Well I'm adding this RSS to my e-mail and could look out
for a lot more of your respective interesting content.
Make sure you update this again very soon. http://bbs.yvuc.cn/home.php?mod=space&uid=95344&do=profile&from=space