The Short- Noah is a well-acted, well directed, and a beautifully shot biblical epic that could stand out as one of the best in a very inconsistent genre.  Noah does take liberties with the original story and suffers from strange plot twists and stretches of bad dialogue but overall is one of the first quality movies of 2014.

Noah was the type of project very few directors would subject themselves to. For Darren Aronofsky it was a very clear passion project. The story of the man who was told by god to build an ark, save animals and his family from a flood, and start the world anew. Aronofsky was more of an indie director with Black Swan, The Fountain, The Wrestler, and Requiem for a Dream being his top films. We knew Noah would cause controversy in large part because it’s a bible story. Also because the director is an indie director who will not shy away from telling the type of story that will take liberties with the tale we already know. That being said, Aronofsky does not disappoint, he keeps his camera fixed on Noah and his family and opens up a magical world where miracles and a higher power are much more pronounced. The film opens up with the story Cain and Abel and brings us to the point where we meet Noah (Crowe), his wife (Connelly), his two sons who grow up to be Logan Lerman (The Perks of Being a Wall Flower,  Percy Jackson Series) and Douglas Booth (Romeo and Juliet). While on the way to see Noah’s Grandfather (Anthony Hopkins) they meet a wounded young girl and nurse her back to health who turns out to be Emma Watson whose character joins the family but is sadly unable to birth children (this becomes an important part for later). They also meet fallen angels who have taken the form of abnormally shaped rock monsters. The rock monsters decide to help Noah build the ark and protect him from Tubal Cain a son of Cain who wants to overtake the ark to survive the impending storm.

Noah is mostly led by the superb acting work of its cast; Crowe has what feels like his best performance in many years as the utterly faithful title character. Crowe is very good especially in his post flood performance as he struggles with the decisions he has made and must make to be sure that “The Creator’s” will is done. The supporting cast is also very good but led by Logan Lerman as Noah’s son Ham and Emma Watson as his adopted daughter Ila. Lerman plays a boy looking for love but stuck in a world where it’s not allowed, he struggles with his father’s decision to not allow him to find love before the flood comes. Lerman gives one of his better performances as the frustratingly needy Ham and while his character’s actions are exactly that, very few actors could help justify his actions like Lerman does. Emma Watson has kept busy with plenty of different roles in the past but in Noah she has more screen time than expected and she utilizes it with a very good performance especially during the films crazier moments towards the end. She deals with the fact that she is unable to give birth to Noah’s son Sham’s children and also has to manage the films major plot twist once the flood actually comes. Ray Winstone also gives a devilish performance as the king who is attempting to kill Noah and claim the ark for his own. He brings the bad guy quality but also plays a guy who just does not understand why the men and women of this world have found themselves in this predicament. The acting all together is very good, and the world Aronofsky has created (even the rock giants) are compelling and fun to watch. 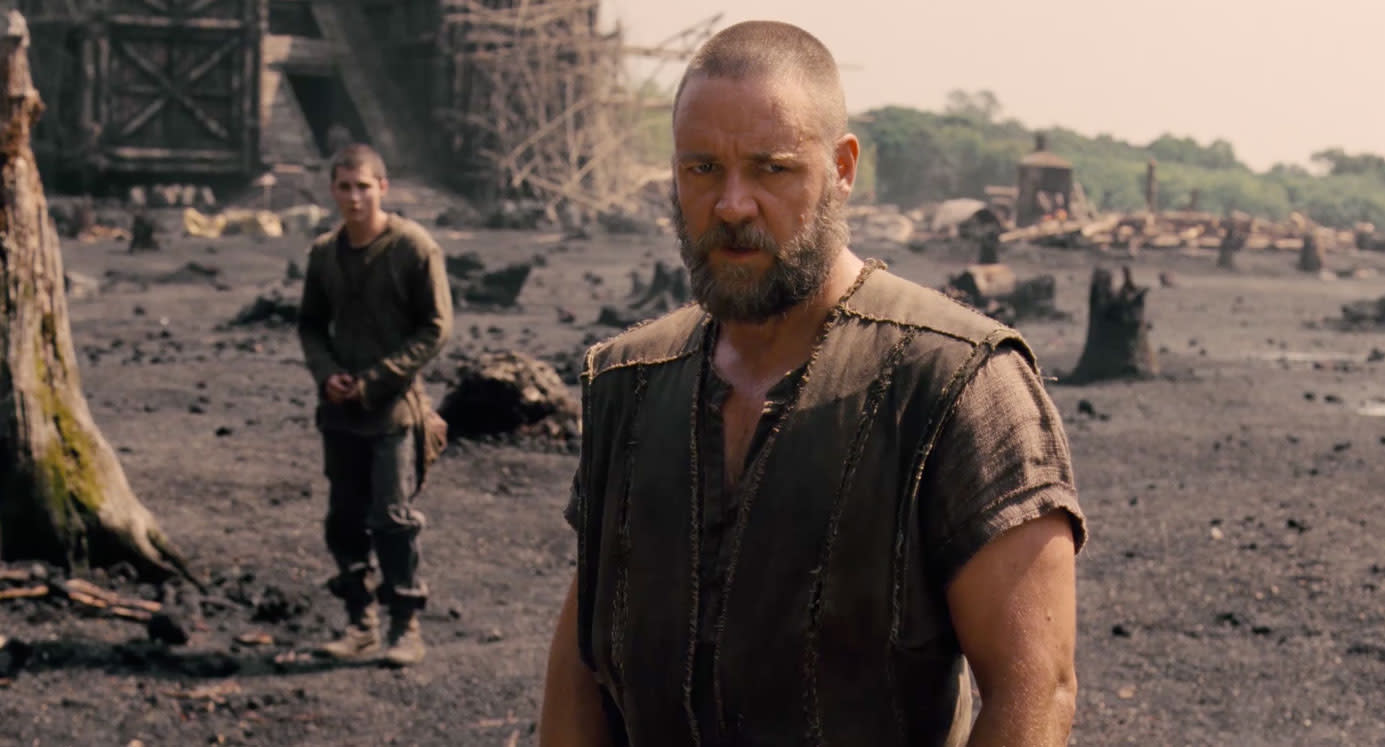 Noah does have a few issues that kept me from adoring it like others have; one of those issues was the choses Darren Aronofsky made towards the end of the film. Not to give too much away there is a 20 minute section of Noah that takes place during the flood and Noah who is a family man who has gone from a mindset of keeping his family safe and doing the job he was given to an obsession to push his family apart. This has a section where Noah goes from gentle and fierce when he needs to be to a Jack Torrance in The Shining breakdown that has him threating the lives of his family members. It provides a few shocking moments but never is Noah set up as a violent man, so his turn to violence had me questioning how we got to that point. It felt as if Aronofsky and Handel needed to add the tension and add the emotion to an already emotional experience and a whole section of film that could have shortened or taken out entirely remains the one questionable section in a 2 hour and 20 minute film. Towards the end of Noah you find an utterly broken title character trying his best to deal with his actions in one of the better moments of the film especially thanks to Crowe’s performance which is heartbreaking and a fantastic way to show that yes many people died in this flood and No it was not an easy task.

Noah is not perfect, some of the dialogue is not very good but acting performances and beautiful cinematography makes it one of the first memorable films of 2014.