The Short: Draft Day may not be the perfect film but football fans will geek out at what seems to be an inside look to the NFL’s second biggest event. Kevin Costner manages to charm but is overshadowed by his fantastic supporting cast and a wonderfully topsy-turvy story that will leave you guessing until its conclusion.

Draft Day had me feeling both excitement and anxiety towards the first NFL backed major motion picture. It was a blacklisted script by two first time writers with a comedy director in Ivan Reitman (Ghostbusters) at the helm and an actor (Kevin Costner) leading a film that probably would have suited him better 15 years ago than it does now. While Costner may not have been my first choice to lead Draft Day he does give a fairly good performance as Cleveland Browns GM Sandy Weaver Jr. Draft Day takes place over the course of a 12 hour period, Sandy Weaver Jr might be the GM of the Browns but he has pressure coming from all different directions, his demonstrative owner wants to make a splash (a terrific turn from Frank Langella), his troublesome head coach wants to adhere to his plan on forming the team (Denis Leary), and his girlfriend and the teams salary cap expert (Jennifer Garner) is not pleased about Weavers response to her being pregnant. Weaver also has pressure coming from players and impending draftees including starting QB Brian Drew (Tom Welling) who is coming off an injury filled season, and outspoken draftee Vontae Mack (The fantastic Chadwick Boseman) who help add more pressure to Weavers draft decisions. The best part about Draft Day is an excellent piece by the filmmakers keeping the viewer totally in the dark about what Weaver and company will do next until right as it happens. It allows Ivan Reitman to ratchet up the excitement of a movie that really could have been fairly boring. 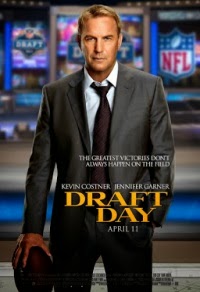 Ivan Reitman does not make many films these days; his last was 2011’s No Strings Attached so for a guy who had only done Sci-fi comedies and romantic comedies it looked like a nice change of pace. Reitman’s direction creates exciting phone conversations between Costner’s Sonny Weaver Jr and other NFL General Managers as they fight to do what’s best for each franchise. Reitman adds style to Draft Day keeping the film from getting too deep into the NFL lingo and at least giving non-Football fans an opportunity to understand why this day is so important. Draft Day is based off the script from two newbie writers Rajiv Joseph and Scott Rothman, the script found its way on to the black list (The yearly countdown of the top unmade scripts in 2012). Following that the film was picked up by Ivan Reitman Entertainment and quickly put into development before Summit Entertainment swept it up for a 2014 release.

Draft Day’s script is filled with sports jargon that could possibly confuse a non-NFL fan  and its dialogue was successful in large part thanks to the cast but the story itself is well written and put together by Joseph and Rothman. The script is actually one of the aspects of Draft Day that I considered less than stellar, the dialogue given to Denis Leary and Frank Langella would have missed its mark if it weren’t for the poise of the guys saying the lines. It does not help that Jennifer Garner (Dallas Buyers Club) is almost emotionless throughout the film, for a character going through a lot at the moment she is extremely calm and stone cold. Garner also lacks the chemistry with the much older Costner that could have added a bit of fire to the relationship between the two co-workers/love interests.

Draft Day won’t be winning any awards this year but I do consider it an above average sports film and for an NFL fan it is fantastically thrilling. Once you’ve invested 30 minutes into these characters the rest of the film is carried by the sense of urgency for Weaver Jr to get this thing the right, and for me the sense of just wanting to see those guys in Cleveland find some success.  You almost wish Draft Day could have revealed how the team actually does but if Draft Day finds success I’m sure Game Day won’t be far behind(Hopefully not).