Something peculiar happened in the early 00’s. With everyone starting to get hooked on the internet middle class America had their first glimpse of other cultures and artforms. It just so happened that their first glimpse was filled with gibberish Japanese, large genitalia, and fighting robots. And so it wasn’t until the around 2009 when America finally became self-aware on how ridiculous calling shows with orange jumpsuit-wearing ninjas, large breasted assassins, and cyberpunk Neo-Tokyos “of more artistic merit”  were. But in between that time we ate that shit up. Weeaboo, otaku, kawaii, moe, and so many other terms like them became part of the internet lexicon, and j-pop, anime, manga, and cosplay became a daily part of the lives of many. And despite the truth that Japan’s big cultural exports were in fact really fucking commercialized, the otaku nerdom grew into some bastardized punk-like scene. Everybody and their mother was fansubbing, bootleg covers and remixes of denpa and j-pop surged in popularity, and mangafox was a household name.

Then it stopped. The anime-punk revolution was over and the transition was akin to someone pulling their head out of a wire-entangled VR helmet having barely escaped from the cyberpolice thinking why the fuck did I do that? But some still held on to their punk spirit and used their knowledge and experience to start a new uprising- one far more interested in being the new punk than yet another part of otakudom. Meishi Smile is one of those people and he’s a shining example of the new Japan-influenced netlabel scene. The founder and curator of ZOOM LENS, Meishi Smile’s LUST takes many cues from j-pop, trance, and shoegaze to create something of his own. It paints a colorful, blurry dream landscape  that’s happy and warm one moment and lonely and heartrending the next. LUST uses its vocabulary of cheerful leads and distorted vocals to great dissonant uses, reminiscent of label buddy’s Space Boyfriend use of bouncy chiptune melodies and simple lyrics to create an atmosphere of cold emptiness and regret. What sounds on the surface cheery and preppy is on closer inspection an emotional mess, a reminder of missed opportunities and heartbreaks.

Because of contradiction between tools and intent, Meishi Smile exemplifies the millennial punk spirit. J-pop is notoriously commercialized much like any other culture’s pop scene, focusing on image and merchandise. It’s an industry intensely focused on looking cute, innocent, and uncontroversial. But Meishi Smile takes the j-pop genre and makes something more emotionally honest and complex. But still uses j-pop’s strength of having been universal enough to be obsessed over by millions worldwide. Meishi Smile’s dreamy, hazy nightmares are so easily identifiable yet so deeply personal that even without the aid of (decipherable) lyrics it still feels like having a personal talk with a close friend. Hope and past failure can be heard behind each melody and each one is as resonant as the next. 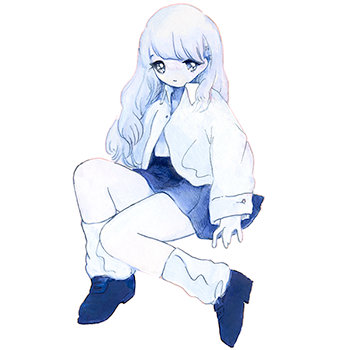 It’s been years since the punk-anime movement subsided. Crunchyroll’s now legit, mangafox has been hit by several lawsuits, and ADV has divided itself like an amoeba but artists like Meishi Smile proves that punk’s not dead and whether for good or bad, it’s not dying anytime soon. Punk comes in different forms and it just so happens that it decided to take the form of emotionally resonant dreams masquerading as preppy j-pop. Hopefully the punk spirit will continue to reside in Meishi Smile and the rest of the ZOOM LENS crew. But for now; Punk is dead. Long live punk.

How does it rate?

Posted by Hannah on Jan 26th, 2014
Wonderful review of Meishi.
Posted by Hannah on Jan 26th, 2014
I've been told I look like a spambot. I'm not a spambot. I genuinely thought it was a good review o.o
Posted by Enoch on Jan 26th, 2014
GO AWAY SPAMBOT. NO ONE LIKES YOU. GEEZ
Posted by Jana on Mar 14th, 2015
Travel to Bali is very good to booking from Accommodation. You will find smhntoieg natural around the island. Exploring the island of Bali, and Best deal of . Check also special deals on in ,, , , , ,and Or if you want to get holiday in Phuket, you can book from , booking online,and for Istanbul Turkey Online reservation.. Thank You.
Posted by Nas on Mar 15th, 2015
Neato frito! That, I think, is a great thing to contribute to. I'm glad you did. I didn't get a chacne to watch the movie yet, but the concept is right up my aesthetic alley.Goog sez: Anyone should find this site a good thing.Amen, Goog.
Posted by Xiriz on Mar 18th, 2015
Didn't they find that one of Buzz Aldrin's early space poos had tavelled, under it's own steam, all the way to the Flexar Quadrant where it acurqied it's own gravity and collapsed in on itself and became a brown hole which swallowed up the entire Xkggrgrrr galaxy? Including, if I remember correctly, a planet inhabited by the peace loving Zimbarr Zimbarr peoples.
Posted by Simo on Mar 18th, 2015
Blimey, thanks for the shout and the kind words Scamp, Ben, evrnyoee. Vue, Top 5 Tuesday is not dead, it's only sleeping. It'll be back soon.Anon 11:52, I like to think we do our fair share of banging-on still. It's just hidden between meat and air stewards demeaning themselves.Cheers,Vic http://enflinwagrw.com [url=http://twjncjeei.com]twjncjeei[/url] [link=http://squlrsv.com]squlrsv[/link]