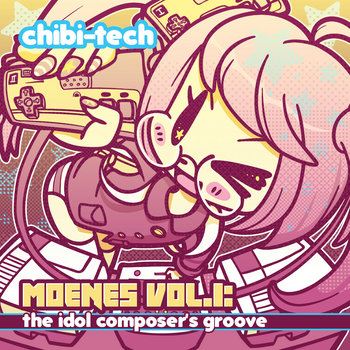 There used to be an intro here about the state of EDM and chiptune or whatever. Then I realized I didn’t give two shits, I just wanted to talk about chibi-tech and all the little hacks that are in her music. First, let's start with a history:

Chibi-tech just might’ve been chiptune’s best kept secret. From when she first entered the scene, chibi-tech’s taken ten year to release her debut album and nine to release anything at all via traditional mp3. But regardless of how long it took to put out an actual album, chibi-tech’s been an innovative, prolific, and rather infamous member of the chiptune scene, making quite a ruckus with her first entry to famicompo that somehow emulated the pitch and tones of a human voice. Since then she’s been a mainstay in the Japanese chip scene with her ridiculous live shows, donning a maid costume and mixing with two famicoms, and contributions to several zines and big videogames (for all that everyone talks about Mega Man 9 igniting the retro craze it was chibi-tech’s work in Zero no Tsukaima: Fantasy Force that was on the forefront- two years before MM9), all the while constantly pushing both the technical limits of the NES and the public perception of chiptune from a nostalgic cash-grab to a respected instrument today.

Chibi-tech’s music is all about breaking your perception of what chiptune can be regardless of how familiar you are with the chip scene. A layman can be impressed at how well the NES can pull off EDM sounds while artists and nerds like me are left holding their heads asking how the fuck did she do that? For being an energetic crowdpleaser, MoeNES vol.1 hides a lot of crazy technical wizardry so I’m just going to indulge myself and gush about all the ridiculous tricks and hacks that went into some of the tracks.

The truth is beyond a couple over-the-top hacks chibi-tech for the most part uses mixing techniques that’s been used by EDM producers for years. The difference is that those techniques within the context of the NES are a pain in the ass to use. There’s a lot of pseudo-sidechaining for the drums and while this might not sound that impressive, I’m pretty sure more chiptune artists would use sidechaining more if that didn’t mean manually muting the melody channel for every drum “note” (and because the drum samples are rather short it’s not like you can quickly send a mute signal within famitracker). To give the drums some extra punch, the DPCM channel (the sample channel) is played together with the noise channel with some $4011 hacking. To quote chibi-tech herself: “It's pretty hard to make DPCM drums sound powerful enough in a heavy mix like what is usually done in 'brostep' songs (especially given the muffled nature of delta playback even @ ~32khz max), so it has to be backed by clever noise channel programming.”

Here are some typical DPCM drum samples to demonstrate just how muffled the samples are.

The big, ridiculous hack is custom software timing. A little explanation: the NES runs at around 60Hz, giving it 60 FPS (It’s actually 60.0988 Hz this comes handy later) and at each frame an instruction (or in layman’s terms, a “note” but this doesn’t make complete sense because you can send instructions to several channels per refresh) can be sent to the NES’s soundchip. Only 60 “notes” a second? That’s got to be a headache for faster songs, why would they do this?Because actually I was lying about these instructions being sent to the NES’s soundchip; it doesn’t have one. The NES’s CPU (the 2A03) works double duty on sound and such there’s no way for the sound to be running at a different clock speed than the game. This is where the term “custom software timing” comes in; running the 2A03 (and other add-on chips) at a higher speed than the default 60 Hz. This is of course something that’d never be used in games because the PPU (aka the video chip) is probably not up to the task of staying in sync with the 2A03. Chiptune of course doesn’t have to worry about this, given all the hardware is doing is producing sound, and in fact Game Boy tracker software like the LSDJ can do some custom timing; using the 60Hz timing for button presses and graphics and using raster interrupt for its BPM (meaning for each vertical line of pixels the Game Boy draws, another instruction can be sent) and this has made the likes of an0va’s dnb fusion and Knife City’s brostep sounds comparatively easier to pull off. The NES gets no such tools, chibi-tech had to write this into the nsf, relying only on VBlank refresh, making this even more impressive. Oh shit, uh I should probably talk about the actual music without raving like a total nerd.

Short and simple, MoeNES vol.1 is filled with catchy, crowd-pleasing EDM goodness. If you’re looking for anything deeper than that you’ll be sorely disappointed but sometimes some loud bangers are all you need. Chibi-tech proves an incredibly versatile artist; taking on drum and bass, brostep, drumstep, trance, hardcore and house; while imbuing her own distinct dempa-infused vibe. For as much as chibi-tech switches genres you’re never going to mistake them for another artist.

MoeNES is simply banger after banger of great EDM held together by some ridiculously complex tricks and hacks to contain it all within the NES. Not only is it some incredibly catchy denpa dance tunes but it’s all chiptune and it’s going to blow your mind no matter how much technical knowledge you know of the NES.

Grade: B Buy It