From Lupita Nyong'o to Adele Dazeem: The highs and lows of the 86th Academy Awards.

It was a fairly unsurprising night at the 86th Academy Awards, there were no musical numbers, no surprise victors just a handful of memorable moments that wrapped up 2013's incredible year of movies. Check out my highs and lows from the night.

She didn't sing or take too many shots at stars(besides Liza). She kept the show going, and created a few memorable moments including a selfie, ordering pizza and her opening monologue was pretty funny but not fearless or overly funny. It was a safe choice for the producers and it managed to be a very good choice following the controversial work of Seth Macfarlane last year. It was not a fearless broadcast but sometimes that's good and Ellen did a decent job.

whether is was Jared Leto, Lupita Nyong'o, or Kristen Anderson-Lopez and Robert Lopez there were plenty of quality speeches. Leto spoke candidly about his band 30 seconds to mars and his mother, Nyong'o showed genuine shock in her win and gave one of my favorite speeches at the Oscars in a long while. The Lopez's rhymed the whole speech for Best Original Song "Let it Go", and Matthew McConaughey gave another fantastically McConaughey speech in which he called himself his own hero. Don't forget 20 Feet from Stardom star Darlene Love singing the acceptance speech, that was seriously awesome! The best speech of the night still goes to Lupita, such a beautiful speech.

High-Gravity wins all the technical oscars.

No movie had more nominations in the bag then Gravity. Such an achievement in technology and film making explains why it took home 7 Oscars including Best Director for Alfonso Cuaron. 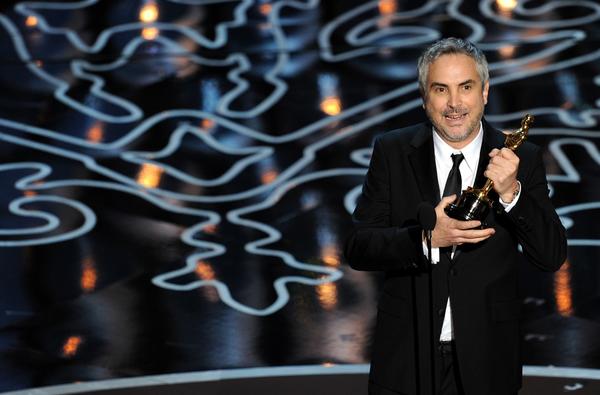 All John Travolta did wrong was absolutely botch the name of the extremely popular Frozen star Idina Menzel. It may not be the biggest mistake in the world but he had a teleprompter and I can imagine he spent atleast one fleeting moment saying "It's Idina not Indina" so you have got to wonder if the brainwaves were even firing for Travolta. Well it will certainly be one of the most memorable moments of this years oscars because we all love a good mess up.

I had very few complaints about the ceremony itself and I thought everyone who won had for the most part deserved the win. Like the uninspired Super Bowl in February, I think we were all hoping for one or two "That just happened!" moments and we got zero. Everyone favored going into the night won the major awards and no one really shocked the world. It's a nit picking complaint but I felt facebook was lighting up more about how boring the whole affair was then people commenting on the awards that were given out.

Some of the montages were quite good but one stuck out. The last heroes montage showed plenty of men, plenty of robots, but there were a number of women who were either forgot or glossed over Ellen Ripley(Sigourney Weaver in Alien) is one of the all time great women heroines and she was shown for 3 seconds while Optimus Prime and Gypsey Danger(WHO ARE ROBOTS!) got more screen time. Who else did we see on this "Hero" montage, Kevin Bacon in footloose. You'd think we have enough heroes on record that we wouldn't need a deep cut of Ren McCormack dancing could have been excluded from it. It was a definite eyebrow raiser.

I have never sat through an entire pre-oscar show before. I honestly don't care about who is wearing what, and I find them boring and very ridiculous. I decided to sit through the one on ABC and just see what all the fuss was about. It was a mix of awkward conversations, horrible questions, and one of the worst 2 hours of television I have ever sat through. It was a nightmare and no one was spared, each and every person appearing on the show was awkward and not one person asked a non-cookie cutter question. It felt as if the presenters showed up an hour before with a list of 10 generic questions and that was all the prep they did. It was a sad display of television and could have been about an hour and 10 minutes shorter and done the exact same thing.

Posted by Edna on Mar 12th, 2015
/ I simply want to say I am just neibwe to blogging and seriously loved this web blog. Almost certainly I’m going to bookmark your blog . You really have terrific well written articles. Thanks a bunch for sharing with us your webpage.
Posted by Twity on Mar 13th, 2015
02/09/2012Just about every one of the things you montien is supprisingly correct and it makes me ponder the reason why I had not looked by this with this effortless before. This piece correctly did turn the happy resting on representing me personally as further as this certain issue goes. Still next to this time here is actually one exact deliver I am not really very comfortable with and while I test to reconcile that with the main theme of the position, let me comprehend immediately what all the rest of the visitors have to point out.Well done.