Last Year CBS Films picked up the romantic comedy/drama The F Word after its solid premier at the Toronto film festival, now the film has gone through a name change to What If and is set for an August 1st release in LA and NY then expanding it across the country in the weeks that follow. It was one of the more buzz worthy films to come out of Toronto last year especially since it’s cast which might not have been huge back then is pretty great now. A cast that is including Girls star and future Sith Lord Adam Driver, Game of Thrones star Oona Chaplin, Life of Pi star Rafe Spall and That Awkward Moment star Mackenzie Davis. The Movie is led by the busy Daniel Radcliffe (Frankenstein, The Brooklyn Bridge) and up and coming indie darling Zoe Kazan (Ruby Sparks,Happythankyoumoreplease). The movies tells the story of two people who hit it off while at a party but are forced to remain nothing more than friends because the girl is in a long term relationship. 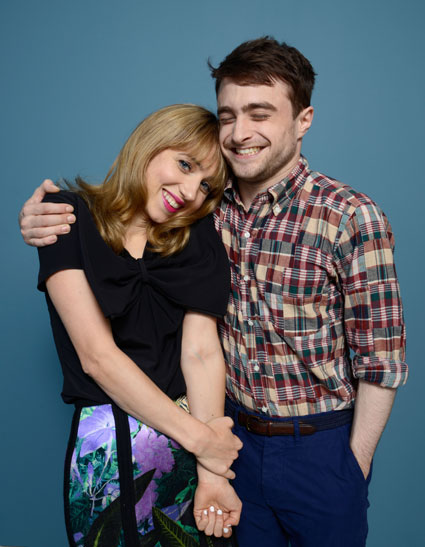 Daniel Radcliffe is just going to do each and every genre and to me nothing is more commendable. Not only is he becoming a really great actor who worked on a TV Drama/Comedy in A Young Doctors Notebook, to of course Fantasy (Harry Potter), and Horror (The Women in Black, Horns, Frankenstein), as well as Drama (Kill Your Darlings), and upcoming works include a biopic (Brooklyn Bridge), and a thriller (Tokyo Vice). He is a busy guy and I think especially after Kill Your Darlings the ceiling for Radcliffe is sky high.

Posted by Adele on Mar 12th, 2015
All of my questions selated-thtnks!
Posted by Marcos on Mar 13th, 2015
Totally agree... In fact, not only talk shows, there are out & proud celebrities in every gerne in the Entertainment idrnstuy in the UK... For Pop music, there is Mark Fahiley from Westlife (and his boyfriend, who was in a lesser known boyband with 2 out members), Duncan from Blue (he's Bi though) and of course, George Michael.For TV, there's John Barrowman from Torchwood (I think ATV broadcasted a couple of seasons), Jon Lee from Casualty (He was also in the group S Club 7) and a few others... After all, England is where the original Queer as folks is from!For reality show, the first ever Pop Idol (the mother of all 'idol' franchises) Will Young is gay, as well as the first Big Brother winner Brian, last year's X Factor winner Joe McElderry is also betting for our team! I mean in England, even soap opera (like Coronation Street and Eastenders) has gay storylines and 'resident' gay characters... (even though some of the actors aren't gay themselves)The Hong Kong representative could be Stephen Chan? Haha... I know, he didn't officially come out and he doesn't have any air time anymore ever since the ICAC case...
Posted by Betsy on Mar 14th, 2015
講 TV Gay 我覺得 Europe/UK 做得放同寫實過 US 好多 我一直 keep 住有睇呢個 blog (gaydaytime.blogspot.com) 連載左好多英國/歐洲 daytime soap 既 gay sotiylrne (當然都有 US 大 hit primetime drama 的 gay sotiylrne), daytime 都可以好平常咁 include gay sotiylrne US 雖然做過 不過全部都爛哂尾... 反觀英國 德國 荷蘭 好多都仲 run 緊... 德國一套 soap Verbotene Liebe 的 gay couple Christian & Olli aka Chrolli 已經係套 soap 既主力之一 run 左成 3 年幾了 http://slrwcib.com [url=http://tpddbzjct.com]tpddbzjct[/url] [link=http://hyrkpuzo.com]hyrkpuzo[/link]